Just a Little Lovin' has a new webpage!

Anna Emilie Groth, Helene Willer Piironen and Flemming H. Jacobsen is producing Just a Little Lovin’ 2015.
Hanne Grasmo and Tor Kjetil Edland who wrote this  larp joins us in organising what will be the fourth run of the game.  . Also joining the team is the wonderful Petter Karlsson who produced the Swedish run of Just a Little Lovin’ 2012 and who was one of the facilitators of  the Danish run in 2013.
The 2015 danish run takes place from the 21st till the 26th of June.
Our location is a youthcamp one hour's drive from Copenhagen called www.birkedal-lejren.dk
This time we hope to reach out to many people who have yet to have played Just a Little Lovin’. Players who haven’t played Just a Little Lovin’ before will be prioritized when the signup opens. Previous participants who are interested in playing the game once more can sign on to an interest list for people who would like to be contacted if a space at the game becomes available at a later stage.
Our signup procedure will be as follows:
The signup will stay open for the whole of February.
If we receive more sign-ups during this month than there are places at the larp we will conduct a lottery.to determine  who gets offered a place at the game. In the sign-up form we will ask those who register some questions about the type of characters they wish to play and are comfortable playing .The lottery will be completely random, but the information given in the sign-up form will be used to check that we have drawn participants who can fill all of the pre-written characters. If we haven’t achieved this when we have drawn the same amount of participants as there are places at the game we will continue drawing, and those drawn that fulfill the criteria needed will move above the last ones drawn who didn’t.
The players who got a place in the lottery will be contacted around the 8th of March and asked to pay within the 15th of March.
Those who did not get lucky in the lottery and players who are not interested in the character offered to them but who are still interested in playing the game if another type of character becomes available will be offered a spot on our reserve list. Unassigned characters will be drawn randomly from the reserve list but as above with regards to players’ wishes and comforts.
Our goal is to have the game filled and paid for by the 8th of April. People who have been offered a place but didn’t pay the participant fee by this deadline will lose their place and the place will be offered to someone on the reserve list.


People who need to cancel after the 8th of April will not be reimbursed, as we might need to use their payment fee to get someone to take a place with short notice.
After the game has been run and we are done with finances, any surplus will be split among players who paid, but had to cancel.
We hope to ensure that everyone will be content with our procedure with full transparency in our signup process, but please ask away if anything seems odd or unfair.
We are still in the process of putting together a budget and look at financing, so at this time we are unable to say anything about the cost of the game.

Posted by Larp Organizers at 8:37 AM 0 comments 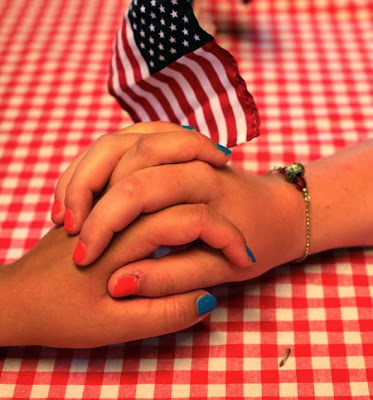 The Book of Just a Little Lovin' (2013 Denmark run) is now available. The editors Casper Gronemann and Claus Raasted have collected experiences and analysises from players and organizers of the larp.  A PDF version can be downloaded here. At the very end of the book we find this beautiful reflection by Signe Løndahl Hertel:

What happened in those days of august 2013?
What did we witness?
Was it a love story?
A tragedy?

An elegy?
Was it ours?
Or was it theirs?

I have never felt so violently confronted with every weakness in me,
everyone one which I have always tried to shed and to hide. Yet now
I feel more strong, more complete, more beautiful than ever.
As if having witnessed this I dare look life straight in the face saying
this:

I am ready to live. No matter what you throw at me, no matter what
you take from me, no matter how many times you let me down. I will
stand tall, smiling and embracing, for I have evicted cynicism and
fear from my heart!

I choose love!
Posted by Larp Organizers at 1:17 PM 0 comments

The third run of Just a Little Lovin' happened in Denmark the 5th - 10th of August this year. Thanks to organizers Flemming Jacobsen, Nynne Rasmussen and Helene Willer Piironen for bringing this game to Denmark. Thanks also to Petter Karlsson and Morgan Jarl who joined us as workshop facilitators and on-site organizers. We had a wonderful diner called "Pepper´s" on site thanks to the efforts of Jonas Trier, Anders Lyng Ebbehøj, Søren Lyng Ebbehøj and Carsten Prag. And thanks once again to Astrid Solgaard for lending us artwork specially made as scenography for Just a Little Lovin'

But most of all thanks to the 64 participants who came, loved and lost and partied like it was 1982-83-and-84. "The show must go on." This year we had participants from Denmark, Sweden, Norway, France, Germany and UK.

What now?
We are sure that this is not the last time it will be possible to experience Just a Little Lovin´. The writers and original organizers Hanne Grasmo and Tor Kjetil Edland would like to make available the characters and script for the game to potential new organizer groups.

To be able to get access to the material for Just a Little Lovin´ with the intention of running it, we have decided on a few criteria that must be in place for us to give the green light:
There are already plans for a rerun in Denmark the summer of 2015. When a place and date is decided on, more information will become available here.

Hanne and Tor Kjetil
Posted by Larp Organizers at 6:05 AM 0 comments

We are very happy to announce that Just a Little Lovin' 2013 has received DKK 50.000 from DUF - Dansk Ungdoms Fællesråd
Posted by Larp Organizers at 11:16 AM 0 comments


Update: change of dates and venue

We are thrilled to anounce that a third run of Just a Little Lovin' will be held in Denmark in the summer of 2013. The initiative to bring this larp to Denmark has been made by Flemming H. Jacobsen. He has recruited a splendid and experienced team consisting of Nynne Rasmussen and Helene Willer Piironen to produce the game in Denmark.

The game will be hosted at Arresøcenteret, a great summercamp north of Copenhagen

Facebook group for the event
Posted by Larp Organizers at 4:02 AM 4 comments

The second run of Just a Little Lovin' is now complete. Thanks to Petter Karlsson, Miriam Lundqvist and Anna Karin Linder for making it possible to let more people experience this story by producing the game in Sweden. Thanks also to Victor Bernhardtz and Sofia Stenler for helping us out as crew during the game. And thanks again to Astrid Solgaard for once again lending us her artwork specially made as scenography for Just a Little Lovin'

We feel grateful for the dedication and emotional bravery of everyone who put their heart and soul into bringing these characters' journeys to life. Thanks to all the participants who came, loved and lost and partied like it was 1982-83-and-84. The memories from this summer will stay with us for a long time.


Reflections on the larp from some of the participants

Game report by Elin Dalstål in Gaming as Women

Nathan Hook has written two pieces on his blog. One is a larp event report focusing on the game mechanics, and the other is a play report about his character's story in relation to other characters.

Leka med döden (Playing with death - English translation here) - The magazine Kom Ut that is published by the The Swedish Federation for Lesbian, Gay, Bisexual and Transgender Rights

In this years book for Solmukohta 2012 there are also two articles about Just a Little Lovin':

It is about Time by Eleanor Saitta, about time and how it was constructed in the larp

Larp and Aesthetic Responsibility by Tova Gerge, about the debate before the first run of the larp in the culture section of Expressen

The entire book: States of Play: Nordic larp around the Word can be downloaded as a PDF or on the Nordic Larp Wiki
Posted by Larp Organizers at 9:19 AM 0 comments